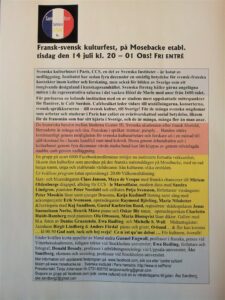 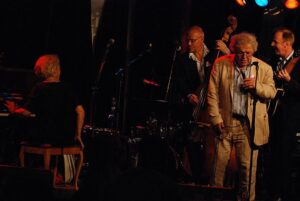 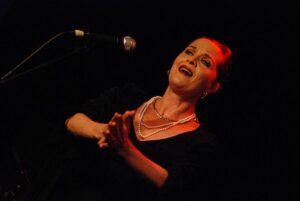 Claes Janson with Anders Färdal; and Maya de Vesque, three of the many artists at the quatorze Juillet 2009 fest for CCS. Also several researchers gave speeches.

This page should have been in both Swedish and Francais – English is the strange compromise! Svenska förstår bara skandinaver och mon Francais är inte god nog.

Le Centre Culturel Suédois à Paris (CCS, now Institut Suédois  Si Paris; Swedish Institute in Paris; Svenska institutet i Paris) was about to be closed down according to proposals from the Swedish government in the spring and summer 2009 . Here I intend to develop a presentation of  some of the opinion activities, publications  and other manifestations in support of the institute. The outcome of the process where our activities certainly played a role: The  institute was not closed! For now here are some items and links, all of them in Swedish. Any suggestions for revisions are very welcome, to  ake.sandberg2 (at) gmail.com

On the French national holiday, le quatorze juillet, July 14, 2009,  a musical and cultural event in support of the CCS was organized at Mosebacke Etablissement in Stockholm. Many musicians and others performed, speeches were held, and jazz musician Claes Janson presented them all. A numerous audience enjoyed the evening and manifested their support. Media covered the event in several articles and transmissions.

When it comes to publications and opinion articles, as the planned closing down was of a national cultural concern we first tried the two leading Stockholm morning newspapers, Dagens Nyheter and Svenska Dagbladet, both  declined publishing in spite of very competent authors. We however found to good channels, Uppsala Nya Tidning in the university town of Uppsala and  very respected when it comes to cultural and research policy, and Göteborgs-Posten, the dominating journal on Sweden’s west coast and second city Gothenburg.

An opinion article in Göteborgs-Posten was written and signed by many leading personalities mainly from the cultural and research sectors, July 22, 2009: “Sverigebilden utomlands kräver Svenska Institutet”   Some endorsements arrived too late for inclusion in the print journal, but here is the impressive, complete list Underteckn of those who signed and wanted to sign the opinion article in Göteborgs-Posten,  including members of the Swedish Academy.

I wrote a short, angry opinion piece, also  in Aftonbladet, August 12, 2009: “Svensk poesi i Paris ställs mot vårdbehov i Sverige” criticizing an author for arguing in a rather populist way that as long as there were unsatisfied needs in hospital care in Sweden, money should not be used for something like a CCS in Paris.

Swedish public radio, Radio Sweden broadcast several programmes on the closing and our Mosebacke event and articles.  A direct transmission was made in the channel Radio Stockholm, interviewing singers Maya de Vesque, Claes Jansson and Åke Sandberg during the event preparations in the afternoon, which informed people about what’s on later that evening.

An interview in Rdio Sweden’s programme ‘Mitt i Musiken’ (In the middle of the music) , Sveriges Radio P1, was published July 14, 2009.  Interview with musician Claes Jansson

July 14 there was an article in the journal of my home town, Säffle-Tidningen, “Svenska Institutet hotas av nedläggning” 14 juli 2009.

As a background to both the articles and the manifestation at Mosebacke there was a very active  Facebook group – no new members are accepted (but there is a new group, below). It was created starting with my thirty something Facebook friends, and within weeks it grew to the substantial size of more than 7 000 members, many of whom active in culture, research and media, and thus rather influential. The group was instrumental in developing a network supporting the institute. On the group page you will find many links, photos and postings of interest. Several members of the group contributed in organizing the Mosebacke event, and writing articles etc, among them Christina Glaser, Tanja Johansson, Johanna Quigley, Claes Janson and Åke Sandberg, Karin Darin supported the process while studying in Paris. On the flyer you will find the names of the many artists and speakers that participated during the evening.

There is also a new still functioning Facebook group,  Soutenons/ Stöd Si Paris. It was started as a supplement. In FB groups bigger than 5.000 members the administrators cannot communicate directly with group members, but in the new smaller group we can. We asked members to migrate to or become members also of the new group. New members are welcome! You never know what might happen as to budget cuts, close-downs etc. in the future.
There was a summary report in Europa-portalen, 24 juli 2009, “Lättnaden är stor på Svenska institutet i Paris”
This page was published in the autumn 2009 – marginally revised 2019 and 2023