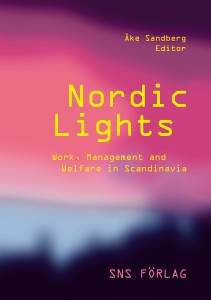 From the introduction to the report: Contested Nordic Models

On the macro level the labour market model with its solidaristic wages policy, active labour market policy and job creation is at the heart of the Swedish model. It interacts with welfare and social security policy. On the micro level we find models of qualified, decent and even ‘good work’ and participative forms of management. These are mutually dependent elements in a social contract. There are however recent tendencies that threaten this contract of ‘productive welfare’: degradation of work, and precarious employment conditions, unemployment as well as hikes in social security and in the welfare sector (lower taxes, less resources and crisis in schools and healthcare) may result in lower trust in the future of the model. Privatizations in the welfare sector with a growing role for tax-evading venture capitalists may additionally strengthen such distrust. The willingness to accept technological change and rationalizations in the economy, so central to the Scandinavian model of economic development and job creation may thus be jeopardized.

On the micro level, is Volvo’s human-centered model of work organization and production at the end of the road? In Volvo’s car assembly plant in Kalmar the work content was 20-40 minutes as compared to a couple of minutes in standard line production. Workers followed the car on a wagon along the line between various stations or they worked in a dock, with the car in a kind of side track. The Uddevalla plant had stationary parallel production groups of nine workers assembling whole cars and working for two hours or more before repeating the tasks. Material was brought to the autonomous groups.

Production according to the innovative concepts in the plants in Kalmar and Uddevalla was closed down some twenty years ago, but the ideas are alive not least in academia but also in practice. In a panel we will discuss what we can learn from the Uddevalla experience. Will we again se forms of production like in the Uddevalla plant where qualified workers in autonomous groups assemble whole cars? And more generally what can we learn for a future development of work organization where workers to a high extent control their own work, supported by advanced forms of automation, organization and learning strategies? And what types of vertical integration of planning and execution and of reorganization, even on the societal level, may be needed to make such an autonomous work possible.

The report argues that we must look at the model as a whole, you cannot pick for example only the productivity and innovation side while making hikes in the welfare systems and damaging the functioning of the labour market by cuts in the enemployment insurance. Productivity and welfare are, in Scandinavia, two sides of the same coin.