I spent a week in Istanbul  (mega 15-20 million, I did not know, believed there were some 2-3 million inhabitants) in September-October, a few days before sailing around Marmara, and a few days after. Istanbul is an old beauty in various stages of decay and reconstruction. The decay was especially evident on the Princes islands with beautiful wooden houses sometimes falling apart, seemingly from a horror movie. And besides new supermodern constructions. The atmosphere in Istanbul I found as told by Osman Pamuk: hüzün and that means things like melancholy, sadness, gloom, blues. East meets west, but less east than I had expected.

I stayed first in the Harem area on the Asian/Anatolian side of the Bosphorus, and then  on the European side, in Karaköy in the modern city north of the Golden Horn, close to the Galata bridge. The first four days I visited all the things you must see in the old city south of the Golden Horn, starting with the huge Topkapi palace The three days after sailing were mainly spent in the modern city around Karaköy and the Ishtikal Street with many small and big  fish restaurants, and also kebab places and good street food. Now a focus on food.

One morning i had a delicious breakfast plate with olives, cold meat, cheeses etc— at  Karaköy-Namlı Gurme, a lively place close to the fsh market. For lunch fresh fish (mackerel) in bread at Karaköy close to Galata Bridge and the Bosphorus lively boat traffic to Anatolia, the Asian side.

In the steep street from Karaköy up towards Ishtikal street and opposite Galata Tower youwill find a small  fish joint at with excellent food an good value, Furreyya Galata Balikcisi. I had their Balik  dürüm, a wrap with grilled fish and caramelized onions – mmm.  While Fürreyya is at the low price end, Sofyali 9 (also the address) nearby is a little less cheap with also delicious fish. In the old town, close to Sirked railway station (the final stop for the Orient express, from Paris – whose passangers, like Agatha Christie, often stayed in the Perla Palas Hotel), I had lunch at two exceptionally good kebab places, both on Hocapasa Sokak: Kasap Osman abdShezade Erzurum Cag Kebabi each with their specials.
–I found all those restaurants in “Istanbul Eats. Exploring the culinary backstreets”, with low and medium price eateries. The book is handy but the authors, Ansel Mullins and Yigal Schleifer, also run a  website. The little book helped finding good food at low prices in spots tourists not always find.
–The last afternoon at sunset around 6 pm I followed a recommendation in the same booklet, and went to Akin Balik, a simple fish place behind the fish market west of the Galata bridge. Following the recommendations in the book I had thought of ordering a chowder-like thick fish soup and the a fish sandwich, and a sallad.  I turned out the personnel were not particularly attentive, especially not for single guest, and I was placed at the back of the restaurant and did not see much of the sunset over the Golden horn and the Bosphorus. They had no fish soup. The fish sandwiches were finished. I got a can of beer, and no glass till I asked for it. And the personnell were arguing all the time over where to place new clients. etc. I recommend th book, to find ‘secret’ restaurants, but also that you have a look yourself before ordering – things change also in Istanbul restaurants.

Being single in a restaurant is a good opportunity to read newspapers, before or after the meal. Geopolitcs in Turkey is course interesting, beling close to Syria, the middle east and Russia. Threats of war. And complex relations to EU and the yearly EU evaluation of progress just presented, criticizing most of all lacking human rights 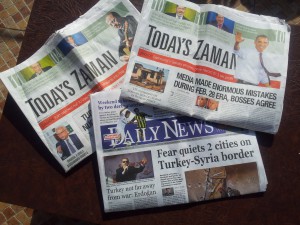 Istanbul’s two ambitious English editions of the major newspapers Today’s Zaman and Hurriyet Daily News give two very different perspectives on politics, Zaman close to today’s government (democratic reforms, conservative and with an islamist tendency, and now perhaps with steps back when it comes to human rights) and Hurriyet close to the traditional, secular Ataturk tendency dominating modern Turkey except the last decade, and with links to the military). It is very fascinating today to read two perspectives on the ongoing trials against earlier alleged military plans of coups, and parliamentary hearings about the role of the press in earlier military actions. In spite of severe limits to the freedom of the press in Turkey today, I find myself thinking that it would be fine if we had in Stockholm serious morning newspapers on to the right as well as to the left, and not as today three conservative ones all supporting the government (Dagens nyheter, Svenska dagbladet, Dagens industri). Sweden has been exceptional in the strength of its  labour movement, and at the same time the weakness of daily left and green media.  But it should of course be added that intellectual freedom is severly limited in Turkey, journalists and authors in jail. And the governing party now openly says it will try and put pressure on media to silence critical voices.
Publicerat den 2012-10-142012-10-17Publicerat i Biografi - 'Biography'2 kommentarer till Istanbul: hüzün, food and food for thought in media