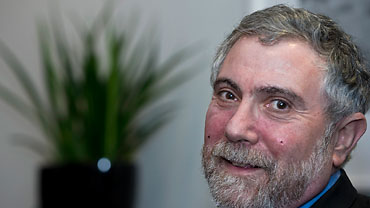 Eight years ago at a seminar organized by Arbetslivsinstitutet (the National Institute for Working Life / NIWL) and the Trade Union Confederation LO he said it would be big mistake to introduce the euro. True today, true in 2003, the year of the Swedish referendum on joining the euro or not – naught won.

In the interview in the news program Aktuellt at 9 PM tonight, Nobel Prize laureate and Princeton professor Paul Krugman said that lack of essential preconditions for a common European currency creates today’s deep economic and political crisis in Europe.

What are those essential preconditions? As I remembered Krugman’s argument from 2003, and have kept reminding my friends and colleagues, Europe has the following problematic charecteristics if it wants a common currency:

# no really common labour market (if there is a tornado in Florida, US building workers move from Oregon to work in Florida, People from northern Sweden do not move to south Italy if there is an earthquake there)

He said, as I recall it, that for these three reasons it is a bad idea to introduce the euro, it will simply not work well.

In the interview today Krugman had similar arguments. Asked about the common currency and interest rate in the 17 euro zone countries, and whether ’one size fits all’, Krugman said:

# Development in the seventeen countries is very different

# The European economies are not integrated in the way that would be needed, in several ways:

– There is no fiscal union, no common taxes

– Not the degree of labour market mobility needed

So, in conclusion, it was premature to introduce the euro. Basically: The necessary preconditions for a succesful common currency (the euro) were not there and they still are not there.

According to Krugman, the introduction of the euro, combined with the inability of the American political system to make necessary changes (mainly due to the Republican party resistance to tax increases) are the two factors that create todays deep crisis in the world economy. And Krugman concludes, the difficult situation will be there for the next ten years.

2 kommentarer till “Paul Krugman: Big mistake to introduce the euro – and the euro is one of the main reasons for today’s world economic crisis”